India’s rich textile heritage is apparent not just in wearable fabrics but also in home furnishings and home linen. The humblest and least celebrated of the textiles has to be the traditional woven cotton towel called the gamcha(Bengali) or gamusa(Assamese) or gamsa or phadi(Manipuri). I’m not aware of what its called in other Indian languages but I’m certain its common across the subcontinent. Traditionally the design has been that of checks and red, white and green probably the most common colours used in the weaving. In some parts of India, the gamcha is woven in a single colour and the quality varies in different regions.

Traditional Manipuri phadi being woven on the loom

Its a delightfully versatile piece of cloth and is used as a head scarf by farmers working in the field or labourers. One can protect their heads from the hot tropical sun and also wipe away sweat. Since its cotton, it has high absorbency and it also dries out quickly making it easy to maintain. In some parts of India, the gamcha is also used like a ‘dhoti’ or loin cloth by younger boys  till they are old enough to wear/manage a dhoti. It can also be used as a sling to carry babies and toddlers as is done in parts of north eastern India. 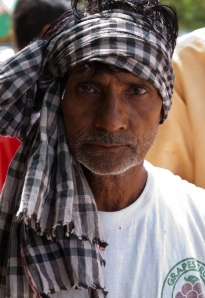 One of my favourites has to be the Assamese gamusa which is woven in white with intricate red borders. The silk ones are ceremonial and are truly stunning! Its worn as a scarf or head scarf and its striking to behold especially when worn by men!

Its a pity that its popularity is waning in India as its so well suited to the tropical climate. A particular politician did introduce the woven towel to the Indian Railway system which was brilliant as I imagine it must have not only provided income to handloom weavers but also reduced cost in terms of maintenance. There are a few Indian and Bangladeshi designers who are reviving this humble piece of cloth and I’m hopeful that it’ll be well received again in the hallowed hall of home linens.

Meanwhile I shall continue my quest to bring this humble woven cloth to as many people I can and I hope that many of you will share and join in this endeavour too.

The humble cotton woven towel is oft ignored by many as it doesn’t represent the fluffy images of fluffy fluffed up towels that we imagine bath towels to be! Tufted towels are shown as the ultimate luxury plush item in a bathroom. Egyptian Pima cotton, organic extra fine super combed varieties… they look and feel absolutely amazing no doubt. So till about 15 years ago, I did have fluffy tufted towels. Growing up we had both tufted and woven towels. Woven towels came from Manipur and the tufted ones were bought from the local market where brands like Bombay Dyeing, Raymond and Mafatlal were considered the best in towels. I’m sure there were plenty of local brands too but I don’t recollect their names sadly.

All was fine in my fluffy world till I started reusing woven towels as they were less bulky to stuff in a suitcase where so many other things were vying for attention and a solo traveler looking for employment could only handle that much luggage. Once I was got a job, I did go and buy myself the nicest fluffy towel I could afford. All was still well in my fluffy world, that is, till I actually used it. Little pieces of fluff stuck to me like making me resemble a shedding Polar bear! Its the humidity I thought. Yes it definitely was…after all such an expensive towel wouldn’t shed itself on me. The humidity of a city like Pune is worth exploring only for a month or two during the monsoons after which its as rare as the abominable snowman himself! And then came the washing. I hand washed it for first few times as living single and on a limited budget meant no washing machine which was all good. On one of my weekends over at a relatives’ place, she said just put it along with the other towels in the washing machine and I happily obliged as that meant no arm wrestling match with a towel that had become too heavy to handle with all the soaked in water. What happened next wasn’t too amusing for when the wash was through, the towels came out all looking snug but the towels had shed themselves on each other. The washing machine’s filter looked like some furry animal was residing in it. I began questioning the existence of fluffy towels since then. Also when they were dried out crisp after more than a day of hanging out, there would be tiny pieces of lint and fluff in the air when I’d fold it.

After a couple of tufted towels more, I gave up and started using woven towels again. I’m glad I did for its been a boon for me. Woven cotton towels are so much easier to use and maintain in any weather. They are far less bulky, absorbent and easy to dry too making it a perfect companion for all holidays. Its been more than 15 years now that I’ve not gone back to tufted towels as I believe they aren’t for me. I couldn’t handle the fluff!

Heart and Soul of Kone Wovens

One of my weavers, Subhasini Devi, is a person without whom I pretty much wouldn’t have been able to do anything. She’s been my strength and support all throughout and without her a lot of what’s been produced now wouldn’t have seen the light of day. Not only does she help me oversee the whole weaving process, the administration and the execution of the weaving, she also has a keen sense of colours and design. I couldn’t thank her enough ever. And yes, she’s my mom too.

My mother… my strength and support woven into one single being! 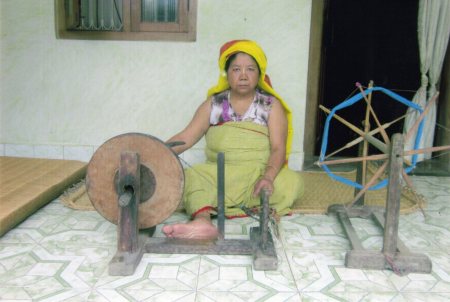 Hard at work behind the spinning wheel

The heart and soul of Kone Wovens

My inspiration and my favourite weaver of course – my grandmother or Abok as we call her. Her name’s Apabi Devi and she’s a bundle of relentless energy! We don’t really know how old she is but she has enough energy and enthusiasm to put any young person to shame. She’s also well respected in the weaving circles for her skill and many vendors who sell at the iconic Ima Keithel or Mother’s Bazaar make a beeline for her beautifully woven products. I’m truly privileged to be able to have towels woven by her.

We are back and thrilled to be back!

Its been a long wait for the new towels collection to finally arrive and its everything I could’ve hoped for. Beautiful colours and I can feel the love with which they’ve been woven for its a great privilege to be able to see Abok(my grandmother) and my Ema’s (Manipuri for Mother) craftswomanship. I still have to do a photoshoot of all the new towels so please bear with me whilst I put that together.

All striped up and ready to go! Check out the amazing handmade soaps & the loofahs too…. perfect gift set! 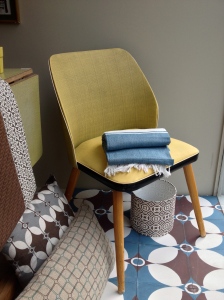 A towel to beat away the blues!

For the last few months I’ve been off and on planning what to do next with regards to my products. Where to sell, how to sell and how to manage the logistics! A lot on my mind and I did get the 2 bestest weavers I could’ve asked for – Abok(my grandmom) and my mother! My mother it turns out hasn’t forgotten the craft of weaving and kudos to her for her relentless search for the perfect colours and best quality cotton. She’s always springing new surprises on me…like the fact that she made amazing bags out of newspaper & jute strings! Photo below:

So the next batch of towels are ready to be shipped. Hooray! And they look fantastic. I got a glimpse of them over really poor network coverage and shaky camera work but just enough so that I saw 8 great designs. Cant wait for them to be here so that I can finally organise a pop up shop! It’ll take a while as logistics are a bit skewed at the moment but they’ll get here very soon.

Watch this space. Hmmm time for some super product photography lessons I think!

Article in Aljazeera about weavers in India

Article in Aljazeera about Indian weavers who are fighting hard to maintain their means of earning & a dignified life competing in the mean time with cheaper machine woven fabrics.

Good article on Weaving as tradition

An article about the Bodo women weavers in Assam – their heritage, their present and the way forward. Under the Action North East Trust organisation(NGO), the weavers are able to showcase their beautiful weaves in ANT(Action North East) stores in India. It has empowered weavers by giving them economic independence and a steady income.

I was folding the towels away when I wrapped one of them around my neck… and voila a scarf is born! It was soft, gentle to the skin and really warm. Perfect for any weather and can double up as a shawl when its windy and a wrap on the beach too! No trip to the beach can be complete without it. This summer grab a Kone woven towel to add to your beach visit 🙂

Posted on April 27, 2014 by tampha
“When women are empowered economically, they are more likely to spend their money on the health, nutrition, and education of their children”
– Melinda Gates
Posted in Uncategorized | Leave a comment
Rooted
Blog at WordPress.com.
Loading Comments...