India’s rich textile heritage is apparent not just in wearable fabrics but also in home furnishings and home linen. The humblest and least celebrated of the textiles has to be the traditional woven cotton towel called the gamcha(Bengali) or gamusa(Assamese) or gamsa or phadi(Manipuri). I’m not aware of what its called in other Indian languages but I’m certain its common across the subcontinent. Traditionally the design has been that of checks and red, white and green probably the most common colours used in the weaving. In some parts of India, the gamcha is woven in a single colour and the quality varies in different regions. 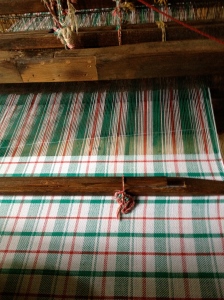 Traditional Manipuri phadi being woven on the loom

Its a delightfully versatile piece of cloth and is used as a head scarf by farmers working in the field or labourers. One can protect their heads from the hot tropical sun and also wipe away sweat. Since its cotton, it has high absorbency and it also dries out quickly making it easy to maintain. In some parts of India, the gamcha is also used like a ‘dhoti’ or loin cloth by younger boys  till they are old enough to wear/manage a dhoti. It can also be used as a sling to carry babies and toddlers as is done in parts of north eastern India.

One of my favourites has to be the Assamese gamusa which is woven in white with intricate red borders. The silk ones are ceremonial and are truly stunning! Its worn as a scarf or head scarf and its striking to behold especially when worn by men! 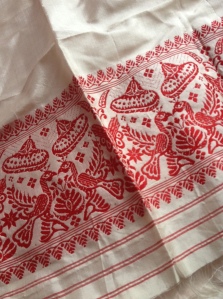 Its a pity that its popularity is waning in India as its so well suited to the tropical climate. A particular politician did introduce the woven towel to the Indian Railway system which was brilliant as I imagine it must have not only provided income to handloom weavers but also reduced cost in terms of maintenance. There are a few Indian and Bangladeshi designers who are reviving this humble piece of cloth and I’m hopeful that it’ll be well received again in the hallowed hall of home linens.

Meanwhile I shall continue my quest to bring this humble woven cloth to as many people I can and I hope that many of you will share and join in this endeavour too.